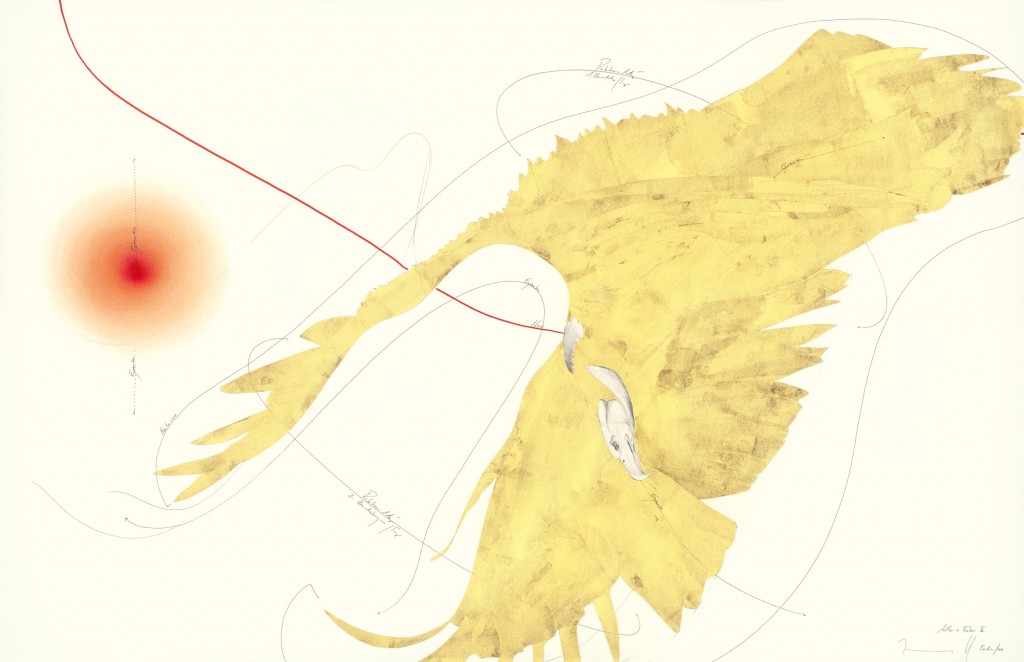 From Beethoven to Roland Barthes, from the frescos by Pietro Cavallini to the Japanese art of the Edo period, across eroticism, psychoanalysis and botany, the fields where Jorinde Voigt conducts her rigorous aesthetic research have no disciplinary and thematic limits. The research takes shape following expansive dynamics, which includes and puts into relation elements that are usually considered marginal and disconnected.

The German philosopher and anthropologist Arnold Gehlen defined man as  physiologically incomplete animal. As lacking any innate filters able to select instinctively internal and external impulses, they are forced to consciously and rationally dominate them, in order to avoid being overwhelmed by this runaway flow of impressions. The useful instrument for this process is language, a system of signs and sounds, which allows man to simplify and manage reality through symbols, concepts and categories, and to cut out its useless or even dangerous aspects. It is, of course, an extremely violent and traumatic process. Yet, it is a necessary condition for any civilisation.

But, after millennia, it occurs that someone tries to reconquer the complexity of reality, which man gave up at the dawn of time, using language.

The work of Jorinde Voigt is part of this ambitious undertaking. This peculiar aspect is what can be called the literary character of her work.

We met her in her Berlin studio.

Most of the fascination created by her work lies in the immediate awareness of being in front of a complex and refined linguistic system, so the first question I ask her is about the origin of this stunning code of signs and how it has been developed. Since she has started to draw, she says, her purpose has always been to represent graphically the chosen subject, including the wide range of elements that have determined it, and the relationships between those elements. It is a process which requires a complex system of signs and mathematical algorithms, to codify the elements to be represented and put them in a dynamic order. For instance, during the realisation of the series Ludwig van Beethoven Sonatas 1-32, she worked for a long time to create a notation system that could represent objectively “the spectrum of the emotions and experiences embedded in Beethoven’s sonatas”.

One has often relied on more and more sophisticated mathematical systems and codification, in order to avoid the banal subjectivism and the contingency of matter. Just think about the development of atonal music, moving into dodecaphony, then serial music and lastly integral serial music. In this evolution the parameters to comply with for composition became more and more rigid, transforming a principle of emancipation in an even stronger principle of coercion.

However, Jorinde, with pen and paper, shows me that even by the strictest system of representation there is always enough space left for freedom of expression. Once the code and the position of signs has been established, the line that should connect them can follow infinite directions. Yet such arbitrary elements appear in her work with the same necessity of the others, as a result of the rigorous process of mimesis.

After having talked about lines, codes and algorithms, it seems that the firmly defined coordinates of her work would impede any further evolutions. But on the other side of her studio there are other works, in which colours have vigorously appeared. How has that been possible in works ruled by such rigour and exactness? “ Obviously, I couldn’t allow myself to use colour for mere aesthetic reasons” she answers “ so I had to find a way to create a precise grammar of colour”. Colours were already used in her older works, but always in a very circumscribed way. The turning point came with Botanic Code, which is the result of a survey on the chromatic values of botanical gardens of many cities in the world, realised through algorithms and parameters that defined proportional areas of colour to be transferred onto aluminium rods.
The work of Jorinde Voigt is the relentless research for expressive forms and a language able to produce the spectre of the complexity and dynamism of reality. Any subject is represented taking into account the multitude of aspects which contribute to determine them. That could be a philosophical text, as well as a pop song. By representing them, the role played by those who interact with them cannot be exclude and the particular situation where this happens, is significant. Those aspects seem irrelevant if we think in terms of functionality, but they became fundamental in terms of experience.

However, when the representation tends to grasp all aspects of reality, it inevitably collapses. Into the strong expressive tension slides the awareness of its impossibility.
Recent works of Jorinde Voigt are inspired by the angels painted by Pietro Cavallini in Santa Cecilia in Rome. The theme of flight is constantly present in her work, but here she approaches the figure that for centuries has represented the ideal perfection and the out of reach fantasy of flight. Although, the usually white feathers turn black. That ideal of absolute beauty and freedom is pervaded by the dark awareness of the inevitability of its failure. However, to stop is impossible and to go back is not allowed. Far from halting this more and more enthralling process of representation, the negativity adds a further element of truth to the work of Jorinde Voigt.